Nelson Johnson at the body of Jim Waller

Late morning, November 3, 1979, at the corner of Carver and Everitt Streets in Greensboro, North Carolina, forty Ku Klux Klansmen and American Nazis handed each other shotguns and automatic weapons from the trunks of their cars and opened fire on black and white anti-Klan demonstrators and union organizers who had gathered at Morningside Homes, a black housing project.

Sandi Smith, a nurse who’d been active in the black student movement and was at the time trying to unionize textile workers, was shot between the eyes.

The KKK and Nazi members shot at anyone who wasn’t hiding while four television news teams and one police officer recorded the action.  They then got back into their cars and sped away after which the Greensboro police arrived and began arresting protestors.

In the aftermath five people were killed and 11 wounded in the attack.   All five were members of the Workers Viewpoint Organization (WVO), and four were rank-and-file union leaders and organizers.

Sandi Smith,  president of the student body and a founding member of the Student Organization for Black Unity (SOBU) at Greensboro’s Bennett College. She was a community organizer for the Greensboro Association of Poor People (GAPP) and became a worker at the textile mill where she and others formed the Revolution Organizing Committee (ROC) to unionize the plant. Sandi was a leader of a march of over 3,000 people in Raleigh to free the Wilmington 10, ten young activists jailed on false charges to stop them from organizing. In her work at a Cone Mills textile plant, she battled sexual harassment, low wages, and unhealthy working conditions.

Dr. Jim Waller who received his medical degree from the University of Chicago and trained at the Lincoln Hospital Collective in New York City. In 1973 at Wounded Knee, South Dakota, Waller organized medical aid and set up a clinic to aid American Indian Movement activists under siege by the FBI. When he moved to North Carolina to teach at Duke University he coordinated Brown Lung screenings in textile mills, co-founding the Carolina Brown Lung Association. He later gave up his medical practice to organize workers becoming vice president of the AFL-CIO local textile workers union  Waller and went to work in a Cone Mills textile plant in Haw River. From inside he helped organize and eventually became president of the AFL-CIO union local after leading a strike in 1978 that helped the union grow from about 25 members to almost 200.

William “Bill” Sampson was a student anti-war activist and president of his college student body. He studied at the Sorbonne in Paris during college, received his Masters degree in Divinity from Harvard in 1971, then studied medicine at the University of Virginia. As a medical student he organized health care workers to support the liberation struggles in southern Africa. Bill left medical school to work and organize in one of Cone Mills’ Greensboro textile plant, where he built the union and focused on training new leaders. The workers had chosen Bill to run for president of the local. 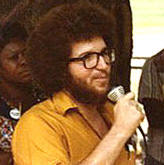 Dr. Michael Nathan, chief of pediatrics at Lincoln Community Health Center in Durham, a clinic that helped children from low-income families. Nathan had been an anti-war and civil rights student activist at Duke University. He organized and led a chapter of the Medical Committee for Human Rights (MCHR), an organization that fought for improved health care for poor people. Mike studied child health and treated sick children in a mountain clinic in Guatemala in 1972 and 1973, and was a leader in a movement to send aid to liberation fighters who eventually toppled the apartheid system is what’s now Zimbabwe.

The permitted march and rally, declaring “Death to the Klan” was organized by the WVO, which was active in the poor neighborhoods and textile mills in the area. It advocated antiracism, unionism, and communist revolution. The group had previously clashed with Ku Klux Klan members prior to the deadly November encounter.  In July 1979 anti-racism protesters disrupted a screening of a pro-white supremacist film, “Birth Of A Nation” in China Grove, North Carolina.

Before the deadly encountered Klan Grand Dragon Virgil Griffin declared, “We can take our country back from the Communist Party, we can take it back from the niggers. It’s time for us to band together. If we have to git in the streets and fight in blood up to our knees, by God, it’s time to git ready to fight! Give them what they want! Fight for this country!”  Griffin “was in the lead car that came in and attacked our march,” said Sally Bermanzohn, one of the survivors of the massacre in which her husband Paul was critically wounded.

At the time, the polite white citizens of Greensboro said it was as a “shoot-out” between “outside agitators.”  And, that all of the dead were communists.  But the back story was that four of the five killed were white men who allied themselves with the black poor and working class’ grievance with the white power structure.  When white radicals began entering the mills, organizing cross-racially, and were elected to union positions, there was “a convergence of forces for social, racial, and economic justice” that the white power structure opposed and hoped would go away.

Court proceedings later revealed that the Greensboro Police Department had an informant in the Klan to whom they had given a copy of the march permit and route, and who two days later would lead the white supremacist caravan.  He informed for the FBI as well.  The federal Bureau of Alcohol, Tobacco and Firearms, also had been running surveillance on the WVO and had an informant among the Nazis as well. At the time of the killings, the police special agent in charge of the Klan informant was at the back of the caravan, having trailed it to the site. He did not intervene, or radio for help, or trip a siren, or pursue the killers as nine of their vehicles got away. Arrests occurred only because two police officers broke ranks and apprehended a van.

Sixteen people were arrested but only six were brought to trial. After two criminal trials all-white juries acquitted the six defendants.  To this day not a single gunman has spent a day in prison, although in 1985 a civil jury found the city, the Ku Klux Klan, and the Nazis liable for violating the civil rights of one demonstrator; the city paid the widow of Dr. Michael Nathan $351,000 on behalf of all parties – some of which was used as seed money for grassroots progressive organizations.

The Greensboro Massacre was one of the “worst homicidal racial and political assaults of the era”, yet there is no historical markers of remembrance to the event, and at the site where it occurred, the streets have since been rerouted, names changed so the bloody intersection no longer exists.

In 2005, Greensboro residents, inspired by post- apartheid South Africa initiated a Truth and Reconciliation Commission to take public testimony and examine the causes and consequences of the massacre; the efforts of the Commission were officially opposed by the Greensboro City Council. The Commission determined that Klan members went to the rally intending to provoke a violent confrontation, and that they fired on demonstrators. It also found that the Greensboro Police Department had infiltrated the Klan and, through a paid informant, knew of the white supremacists’ plans and the strong potential for violence. The informant had formerly been on the Federal Bureau of Investigation’s payroll but had maintained contact with his agent supervisor. Consequently, the FBI was also aware of the impending armed confrontation.

2 responses to “The 1979 Greensboro Massacre”