Stokely Carmichael, national head of the Student Nonviolent Coordinating Committee [SNCC] speaks from the hood of an automobile on the campus of Florida A&M University, April 16, 1967, in Tallahassee, Florida.  Several hundred students listened as Carmichael spoke of “Black Power” and the Vietnam war.  (AP Photo/stf)

“In Lowndes County, we developed something called the Lowndes County Freedom Organization. It is a political party. The Alabama law says that if you have a Party you must have an emblem. We chose for the emblem a black panther, a beautiful black animal which symbolizes the strength and dignity of black people…Now there is a Party in Alabama called the Alabama Democratic Party. It is all white. It has as its emblem a white rooster and the words “white supremacy – for the right”. Now the gentlemen of the Press, because they’re advertisers, and because most of them are white, and because they’re produced by that white institution, never called the Lowndes County Freedom Organization by its name, but rather they call it the Black Panther Party. Our question is, Why don’t they call the Alabama Democratic Party the “White Cock Party”? It’s fair to us…” (1966)

END_OF_DOCUMENT_TOKEN_TO_BE_REPLACED

Huey Percy Newton  founded the Afro-American Society and was a co-founder of the Black Panther Party, serving as its minister of defense during much of the 1960s. Later he turned to community service for the poor.

The Newton family moved to Oakland, California, in 1945 to take advantage of the job opportunities created by World War II wartime industries. In Oakland the family moved often, and in one house Huey was compelled to sleep in the kitchen. Even though the Newton’s were poor and victims of discrimination and segregation, Huey contends that he never felt deprived as a child and that he never went hungry.

Newton, founded the Black Panther Party for Self Defense in 1966 with Bobby Seale. The organization advocated that Black Americans “bear arms in self-defense” against community repression by police. Among the tactics he employed was the institution of ”justice patrols” by armed Black men whose purpose was to monitor police actions and inform community residents of their rights when confronted by law enforcement.

In 1967 Newton was arrested and charged in the shooting of one policeman and the killing of another. His trial and subsequent conviction focused attention on the issue of police brutality.

Newton was considered a political prisoner. A national movement using the catch phrase ”Free Huey!” rallied people across the nation to the cause of civil rights.

After he served 22 months, his conviction was overturned due to a prosecution error in the trial.

In 1970, he was called to appear before the California State Senate Un-American Activities committee to answer charges that the Black Panther Party was a communist-run organization.

In 1974, Newton spent time as a fugitive in Cuba after being accused in the murder of a 14-year-old prostitute and of pistol-whipping his tailor. He returned to Oakland and faced two trials on the charges, both of which ended in hung juries.

ARREST IN MURDER OF NEWTON 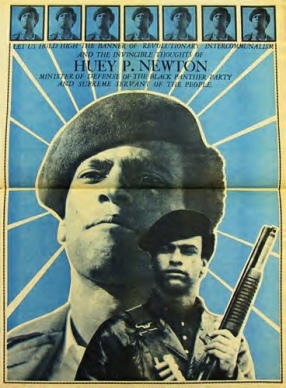 “Revolutionary Nationalism- A good example of revolutionary nationalism was the revolution in Algeria when Ben Bella took over. The French were kicked out but it was a people’s revolution because the people ended up power. The leaders that took over were not interested in the profit motive where they could exploit the people and keep them in a state of slavery. They nationalized the industry and plowed the would be profits into the community. That’s what socialism is all about in a nut The people’s representatives are in office strictly on the leave of the people. The wealth of the country is controlled by people and they are considered when ever modifications in the industries are made.

The Black Panther Party is a revolutionary Nationalist group and we see a major contradiction between capitalism in this country and our interests. We realize that this country became very rich upon slavery and that slavery is capitalism in the extreme. We have two evils to fight, capitalism and racism. We must destroy both racism and capitalism.”

END_OF_DOCUMENT_TOKEN_TO_BE_REPLACED

Elaine Jones | Rekindling the Spirit of Brown v. Board of Education

Rekindling the Spirit of Brown v. Board of Education “A Call to Action!” 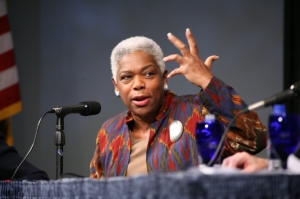 Elaine Jones, (former) president of the NAACP Legal Defense and Education Fund calls on the nation to recommit itself to ensuring equal education opportunities for all students, regardless of race, creed or gender in keynote address to the Center for Social Justice at UC Berkeley on November 13, 2003. 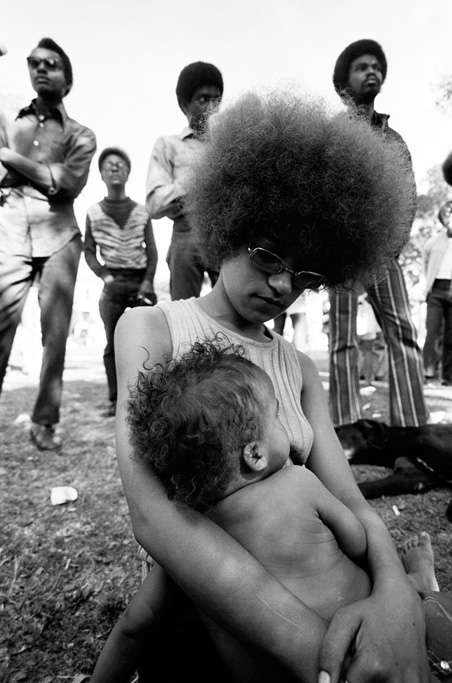 What We Want
What We Believe

1. We want freedom. We want power to determine the destiny of our Black Community.

We believe that black people will not be free until we are able to determine our destiny.

2. We want full employment for our people.

We believe that the federal government is responsible and obligated to give every man employment or a guaranteed income. We believe that if the white American businessmen will not give full employment, then the means of production should be taken from the businessmen and placed in the community so that the people of the community can organize and employ all of its people and give a high standard of living.

3. We want an end to the robbery by the white man of our Black Community.

We believe that this racist government has robbed us and now we are demanding the overdue debt of forty acres and two mules. Forty acres and two mules was promised 100 years ago as restitution for slave labor and mass murder of black people. We will accept the payment as currency which will be distributed to our many communities. The Germans are now aiding the Jews in Israel for the genocide of the Jewish people. The Germans murdered six million Jews. The American racist has taken part in the slaughter of over twenty million black people; therefore, we feel that this is a modest demand that we make.

4. We want decent housing, fit for shelter of human beings.

We believe that if the white landlords will not give decent housing to our black community, then the housing and the land should be made into cooperatives so that our community, with government aid, can build and make decent housing for its people.

We believe in an educational system that will give to our people a knowledge of self. If a man does not have knowledge of himself and his position in society and the world, then he has little chance to relate to anything else.

END_OF_DOCUMENT_TOKEN_TO_BE_REPLACED

What to the Slave is the Fourth of July? 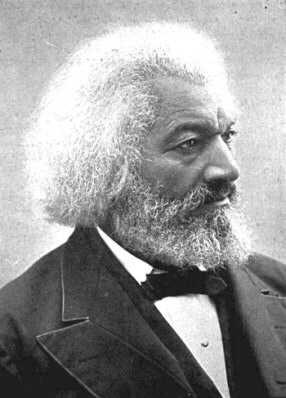 Mr. President, Friends and Fellow Citizens: He who could address this audience without a quailing sensation, has stronger nerves than I have. I do not remember ever to have appeared as a speaker before any assembly more shrinkingly, nor with greater distrust of my ability, than I do this day. A feeling has crept over me, quite unfavorable to the exercise of my limited powers of speech. The task before me is one which requires much previous thought and study for its proper performance. I know that apologies of this sort are generally considered flat and unmeaning. I trust, however, that mine will not be so considered. Should I seem at ease, my appearance would much misrepresent me. The little experience I have had in addressing public meetings, in country schoolhouses, avails me nothing on the present occasion.

The papers and placards say, that I am to deliver a 4th [of] July oration. This certainly sounds large, and out of the common way, for it is true that I have often had the privilege to speak in this beautiful Hall, and to address many who now honor me with their presence. But neither their familiar faces, nor the perfect gage I think I have of Corinthian Hall, seems to free me from embarrassment.

The fact is, ladies and gentlemen, the distance between this platform and the slave plantation, from which I escaped, is considerable—and the difficulties to be overcome in getting from the latter to the former, are by no means slight. That I am here to-day is, to me, a matter of astonishment as well as of gratitude. You will not, therefore, be surprised, if in what I have to say. I evince no elaborate preparation, nor grace my speech with any high sounding exordium. With little experience and with less learning, I have been able to throw my thoughts hastily and imperfectly together; and trusting to your patient and generous indulgence, I will proceed to lay them before you.

This, for the purpose of this celebration, is the 4th of July. It is the birthday of your National Independence, and of your political freedom. This, to you, is what the Passover was to the emancipated people of God. It carries your minds back to the day, and to the act of your great deliverance; and to the signs, and to the wonders, associated with that act, and that day. This celebration also marks the beginning of another year of your national life; and reminds you that the Republic of America is now 76 years old. I am glad, fellow-citizens, that your nation is so young. Seventy-six years, though a good old age for a man, is but a mere speck in the life of a nation. Three score years and ten is the allotted time for individual men; but nations number their years by thousands. According to this fact, you are, even now, only in the beginning of your national career, still lingering in the period of childhood. I repeat, I am glad this is so. There is hope in the thought, and hope is much needed, under the dark clouds which lower above the horizon. The eye of the reformer is met with angry flashes, portending disastrous times; but his heart may well beat lighter at the thought that America is young, and that she is still in the impressible stage of her existence. May he not hope that high lessons of wisdom, of justice and of truth, will yet give direction to her destiny? Were the nation older, the patriot’s heart might be sadder, and the reformer’s brow heavier. Its future might be shrouded in gloom, and the hope of its prophets go out in sorrow. There is consolation in the thought that America is young. Great streams are not easily turned from channels, worn deep in the course of ages. They may sometimes rise in quiet and stately majesty, and inundate the land, refreshing and fertilizing the earth with their mysterious properties. They may also rise in wrath and fury, and bear away, on their angry waves, the accumulated wealth of years of toil and hardship. They, however, gradually flow back to the same old channel, and flow on as serenely as ever. But, while the river may not be turned aside, it may dry up, and leave nothing behind but the withered branch, and the unsightly rock, to howl in the abyss-sweeping wind, the sad tale of departed glory. As with rivers so with nations.

END_OF_DOCUMENT_TOKEN_TO_BE_REPLACED 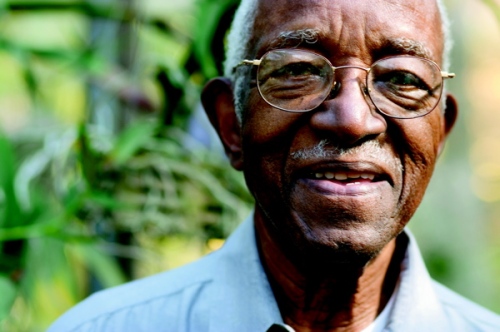 The word “giant” is too small for Dr. John Hope Franklin.   Franklin was an honored senior statesman,  griot, teacher,  master historian.   If you haven’t read From Slavery To Freedom you don’t know black history.

Franklin’s physical presence will be missed, but his work will endure for ages.  Thank you Dr. Franklin.