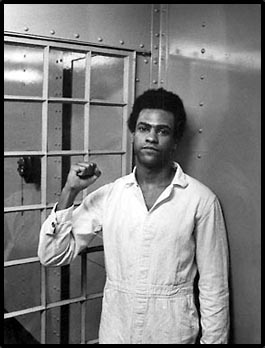 Huey Percy Newton  founded the Afro-American Society and was a co-founder of the Black Panther Party, serving as its minister of defense during much of the 1960s. Later he turned to community service for the poor.

The Newton family moved to Oakland, California, in 1945 to take advantage of the job opportunities created by World War II wartime industries. In Oakland the family moved often, and in one house Huey was compelled to sleep in the kitchen. Even though the Newton’s were poor and victims of discrimination and segregation, Huey contends that he never felt deprived as a child and that he never went hungry.

Newton, founded the Black Panther Party for Self Defense in 1966 with Bobby Seale. The organization advocated that Black Americans “bear arms in self-defense” against community repression by police. Among the tactics he employed was the institution of ”justice patrols” by armed Black men whose purpose was to monitor police actions and inform community residents of their rights when confronted by law enforcement.

In 1967 Newton was arrested and charged in the shooting of one policeman and the killing of another. His trial and subsequent conviction focused attention on the issue of police brutality.

Newton was considered a political prisoner. A national movement using the catch phrase ”Free Huey!” rallied people across the nation to the cause of civil rights.

After he served 22 months, his conviction was overturned due to a prosecution error in the trial.

In 1970, he was called to appear before the California State Senate Un-American Activities committee to answer charges that the Black Panther Party was a communist-run organization.

In 1974, Newton spent time as a fugitive in Cuba after being accused in the murder of a 14-year-old prostitute and of pistol-whipping his tailor. He returned to Oakland and faced two trials on the charges, both of which ended in hung juries.

ARREST IN MURDER OF NEWTON

“Revolutionary Nationalism- A good example of revolutionary nationalism was the revolution in Algeria when Ben Bella took over. The French were kicked out but it was a people’s revolution because the people ended up power. The leaders that took over were not interested in the profit motive where they could exploit the people and keep them in a state of slavery. They nationalized the industry and plowed the would be profits into the community. That’s what socialism is all about in a nut The people’s representatives are in office strictly on the leave of the people. The wealth of the country is controlled by people and they are considered when ever modifications in the industries are made.

The Black Panther Party is a revolutionary Nationalist group and we see a major contradiction between capitalism in this country and our interests. We realize that this country became very rich upon slavery and that slavery is capitalism in the extreme. We have two evils to fight, capitalism and racism. We must destroy both racism and capitalism.”

END_OF_DOCUMENT_TOKEN_TO_BE_REPLACED

Jalil Abdul Muntaqim, 55, has been incarcerated since the 1970s. He was recently indicted for a 35-year-old murder of a San Francisco police officer. The investigation into the case has been going on for decades. Spokespersons for the 8 people indicted, 7 of whom are former members of the Black Panther Party, say that there is no evidence to implicate any of the men arrested. Muntq

Statement on the S.F. 8 Plea Agreement

First, I would like to thank all my friends and supporters for their tenacious and tireless work in support of the S.F.8, especially the San Francisco 8 Support Committee, Committee in Defense of Human Rights, Asian-Americans Committee for the S.F. 8, Freedom Archives, and many others. I wish to thank the excellent legal team whose unwavering commitment to the task was inspiring. I especially want to thank the lawyers who did the majority of the behind-the-scenes legwork by name: Soffiyah Elijah, Jenny Kang, Julie de Almeida, Heather Hardwick, Rai Sue Sussman, and Lori Flowers. This team of women suffering the testosterone of as many as ten male lead attorneys, plus the eight men accused, truly had their feminist code tested. Naturally, I want to thank the most noted private investigators, Adam Raskin and Nancy Pemberton, whose investigative technique and services were outstanding.

Today we were to start the preliminary hearing but because of our strong legal defense team and growing public support, the California prosecutor offered plea settlements that could not be ignored. The entire group discussed whether I would plead no contest to conspiracy to manslaughter. After some discussion, I reluctantly agreed to take the plea and be sentenced to 3 years probation; 1 year of jail time, credit for time served, concurrent with New York State sentence, dismissing 1st degree murder and conspiracy to commit murder.

Also, because of my plea, four other defendants would have all charges dismissed for insufficient evidence. This was a no-brainer especially considering the elder brothers suffered a variety of health issues ranging from high blood pressure, chronic respiratory problems, diabetes, PTSD, and prostate cancer. Although I have my own health issues, in my near 38 years of imprisonment, I believe I am in better shape than all four combined (Ha).

In the last 25 years prior to these charges being lodged, the brothers had been living peaceful and productive lives raising their families, and offering community services. During the period from their release on bail to this date, they had been running themselves ragged across the country telling the story of Cointelpro destruction of the Black Panther Party, the Legacy of Torture, and building support for the case.

While I would have liked to have continued the legal fight to what I believe would have resulted in complete exoneration of all charges, I know the jury system is fickle. I have seen too many innocent men in prison who fought with the conviction of being innocent after a reasonable plea bargain was offered, and they ultimately lost due to prosecutorial misconduct, defense attorney errors, improper jury instructions by a judge, and/or a fickle jury.

Unfortunately, their loss results in spending decades in prison fighting for a reversal or waiting to be released on parole, or in the worst cases, death row DNA exonerations. The American judicial system is nowhere near being without flaws, as the overwhelming number of Black men in prison sorely attests. Given these circumstances, my taking this plea is a bitter-sweet win-win.

Finally, I would like to thank with profound appreciation my attorneys Daro Inouye, a 30+ year veteran of the San Francisco Public Defenders Office, whose trial experiences and skills are incomparable; and Mark Goldrosen, a remarkable, selfless trial technician and writer whose understanding of both State and Federal law brought the court (and some of the attorneys) to task.